Focus on What You Want – Not What You Don’t Want 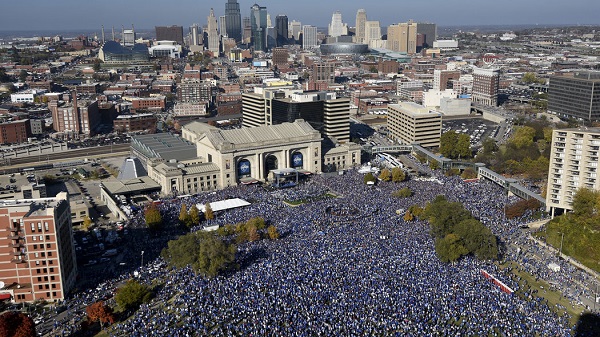 When I lived in the Northeast and in Wisconsin, those regions were progressive, innovative and forward thinking. Then I moved to “The Show Me State,” where things are slow to change and until recently were still fighting the Civil War on the gridiron during the “Border War” games between the universities of Kansas and Missouri.

The absence of water and resistance to change have been a source of longing and irritation for many years…  What you resist – persists.

The recent World Series and the Kansas City Royals winning this coveted title after 30 years, helped put a lot into perspective for me.

Yes, the KC people were showing how provincial we can be when they had to eat Kansas City Barbecue in New York, the city with more exquisite restaurants in the world, or wanted the Royals to lose to the Mets so they could win the World Series in Kansas City…

But here’s the deal: the Kansas City Royals have reminded me why this place is special and a model for other communities in many ways.

This team never gave up. Eight of the 11 playoff and Series games were won when they came from behind after the 6th inning and won the game. The guy who got the winning run in the last game, Christian Colon, hadn’t played in 4-6 weeks – but when asked, he said “I just practiced every day like I was in the game.” After the games, the players would go to the Power and Light District where fans gathered to watch the games and buy them drinks, with bar tabs over $14,000 – to thank them for being fans.

Their spirit of persistence and gratitude permeated the city during the playoff games and culminated with the World Series victory parade. An estimated 800,000 people showed up for the celebration. For a city with a population about 500,000 and 2 million in the metro area, that’s not a bad turn out! My friends on the coasts couldn’t believe that the city shut down – literally – to celebrate the players and the city. Schools closed. Businesses closed or slowed down to watch or participate.

People waited for hours for free transportation then were packed like sardines, without seeing a thing. Yet as people tried to work their way through the crowd, there was a level of civility and graciousness that was amazing: Excuse me; thank you so much; I’m so sorry…. There were only 3 arrests.

Over 7 tons of trash was collected… and this quote from the public works clean-up crew summed it up it up for me:

“It’s quite a reward for Kansas City to have world champion Royals so we’re excited to clean up after them.”

Call us provincial. Call us a fly-over state. Call us whatever you want. This community and the team demonstrated a fighting spirit, without a fight, a winning attitude without arrogance, and what it’s like to celebrate as a community.

I wish we could stay in this “bubble” a little longer. But now we know what it looks and feels like to live in unity, with the spirit of generosity, kindness and joy. And the rest of the country got to see that too.

What would happen if communities focused on that?

Marty Stanley is a visionary and catalyst for organizational change. If you’re tired of the status quo and want an environment of generosity, joy and prosperity, call Marty today: 816-695-5453. martystanlty@alteringoutcomes.com